You have to admire McDonald’s.  From a linguistic perspective if nothing else.  Because McDonald’s have a strange ability to change the English language.  Although I don’t know for sure, it seems as if they do it unintentionally.  “Would you like fries with that?” is now a mainstay of the English language.  “Happy Meal” has become standard vocabulary.  “Chicken McNuggets” even has a linguistic spin-off in “Rabbit McMicrowaves”.  And if the infiltration of the general lexicon isn’t enough, it seems McDonald’s have now developed power over the grammar rules. 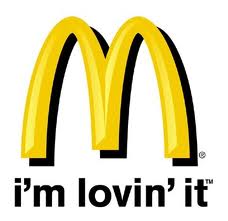 In English, the theory is that we ‘love’ things.  Because love is supposed to be general, not temporary.  But McDonald’s has decided differently.  “I’m lovin’ it”, their current baseline, has gone against the rules (and as of this week, it has been doing so for nine years).  The strange thing is, ”I’m lovin’ it” seems to have been adopted as an acceptable term in the English language for something you like.  Which may be the first step towards a full new McEnglish.

For me, there’s a problem with “I’m lovin’ it”.  It makes me think the food there is temporary.  Like I’ll become sick from it.  Worse yet, love relates to amorous or sexual feelings.  And I’m sorry, but  these really don’t create the sort of image I want to associate with my food.