Wow!  My virus scanner has just informed me that my computer starts 104% faster.  Now, I know it’s easy to take a cynical approach to news like this, or to ask what it is 104% faster than, but personally, I've decided to settle for being impressed.  After all, 104% is no laughing matter.  In fact, it’s a good indication of what’s happening to percentages.  They all seem to be growing larger.  100% used to be impressive.  But is it still?

When talking about personal commitment and effort, 100% seems to be a bare minimum.  I’ve been overwhelmed by the number of websites where companies promise 100% commitment to each of their clients, by the businesses that accept nothing less than 101% customer satisfaction, and by professional athletes who give 110% in training.

I’ve got to admit that most political promises seem to be about as accurate as bus timetables.  Actually, if I didn’t know better, I would have believed politicians make promises they never expect to fulfil. 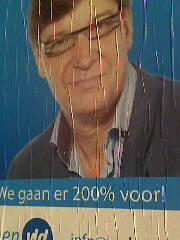 This has left me with some problems.  With the ridiculously high levels they have reached, I’ve become concerned that percentages might be somewhat meaningless.  And so, I have to ask: when percentages appear in your texts, are they feasible or simply a result of poor copywriting?  Is it time to have more plausible and convincing texts?

Fortunately, Schrijf.be is there to help you out, but not 24 hours a day, nor 365 days a year.  Just when you expect us to be there.